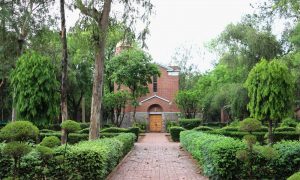 The College Chapel was constructed in 1952. It was consecrated by Rt. Rev. Wilkinson, the Bishop of Amritsar. The first Chapel bell which was brought from the St. Mary’s Church Ajmer cracked after some time. In 1954, Rev. Jarvis made an appeal in The Yorkshire Post for a bell and the Directors of Springfield Mill in Guiseley, Yorkshire, offered to give the one which had begun its existence in 1842 in Guiseley calling men and women to work at the mill. It arrived in Delhi on the evening before Founder’s Day in 1954 and was hung in the turret, designed by Sir Walter George.

A Brief History: The Chapel has been built in fulfilment of an intention dating back to the building of the College on its present site. The war situation prohibited its erection in 1940, and in the following years rising costs made for continual postponement. At last in 1950, it was decided not to wait any longer for a fall in prices, but to modify the plans. The architect, Mr. Walter George was informed as to how much money was available and he agreed to plan a chapel costing fifty thousand rupees. This money was the result of an appeal begun in 1936, contributed to generously by former administrators, members of staff and others. The Diocese of Delhi, friends in Cambridge and other English Missionary Societies enabled us to add considerably to our funds.

In accordance with his instructions the architect produced a plan, which has tried to combine certain Byzantine features and a cupola copied from a Cambridge College, and has used up quite charmingly two of the pillars that had been lying unused outside Allnutt Gate since 1940. As a result we have a lofty Chapel with a narthex, where we leave our shoes before entering the Chapel proper, and an area filled with massive pews to seat thirty four, a carpeted area in front where on great occasions another forty may sit on the floor, a brief chancel with priest’s desk and lectern, and then, within the altar rails, a dignified Sanctuary, with its Barauli sandstone altar flush with the Apse, the wall of which has been squared to receive it. The result, especially in the limited lightning of the sanctuary is an effect of distance. The altar seems to be standing as, indeed it is – on the threshold of eternity. A vestry not yet completely furnished, and a recess on the opposite side for the piano – which may be called the transept – complete the Chapel.