St. Stephen’s College is a religious foundation drawing inspiration from the life and teachings of Jesus Christ. It aims at helping its members realise spiritual and moral as well as intellectual and aesthetic values.

Founded on 1 February 1881, St. Stephen’s is the oldest college in Delhi. It was first affiliated to Calcutta University, and later to Punjab University. Finally with the establishment of Delhi University in 1922, it became one of its three original constituent colleges. 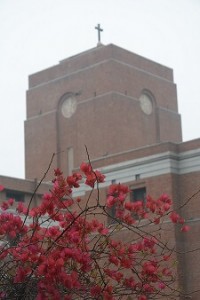 The College began with just five student and three teachers in a small house in Katra Khushal Rai, near Kinari Bazar in Chandni Chowk. From 1891 to 1941 it was housed in the building now hosted by the Office of the Delhi Election Commission, near St. James Church inside Kashmere Gate. In 1941 it shifted to its present site in the university Enclave. The present buildings of the College, with the exception of a few later additions, were designed by the distinguished architect Walter George.

The College was established by a Christian mission from Westcott House, Cambridge. The Rev. Samuel Scott Allnutt was its Founder and first Principal. The anniversary of his death is observed as Founder’s Day on 7 December every year.

The College has an all-India and all-denomination membership; it has students and teachers from all communities and from all parts of India. There are also some teachers and students from abroad. There is provision for nearly 200 gentlemen and 186 ladies to reside in College.

The College provides ample facilities for development of an integrated personality. It has a fine library containing more than ninety thousand books. The College playing fields for out-door games are situated outside the Old City Wall between Kashmere Gate & Mori Gate while there are facilities for playing tennis, basketball and soccer on the College Campus. The Francis Monk Gymnasium, the Junior Common Room and the Ladies Common Room provide facilities for gymnastics, badminton, squash, table tennis and other indoor games.

The College has a Chapel, which is open to all members of College for worship and meditation. Instruction from the life & teachings of Jesus Christ is given to first year Christian students.

Student Societies and Clubs play a vital role in the total life of the College. For each subject there is a Society which sponsors extra-curricular lectures and discussion and, in general, tries to stimulate interest in the subject. There are many other academic and cultural societies and clubs covering a wide range of activities, such as debating, dramatics, mountaineering, film and music appreciation, social service, photography, electronics and astronomy.

The College awards each year a number of prizes to students for high achievement in academic & extra-curricular activities. Scholarships and other financial aid are given to deserving students on the basis of need-cum-merit.