“May the Philosophical Society of St. Stephen’s College always flourish and go from strength to strength.”
S.K Bose (May, 1981).

From its inception in the College during the 1950s, the Philosophical Society has harbored great minds who have given much to the pursuit of Philosophy. Throughout the years, the Philosophical Society conducts its discourses and debates on varying viewpoints from ancient to modern philosophy, Eastern to Western Philosophy and other schools of thought. Though the Society has been fairly active in its discussions, in the form of papers written and presented by way of comments on, or criticisms of, there has been a dearth of evidence with regard to proper written record of such activities. The society has experienced the participation of great minds, with excellent professors to make the discussions conducive and engaging, such as Ernest Geller (London School of Economics, Author of Words and Things, 1959), Nishi Kanta Sen (Head of Department, Philosophy in 1964 at Shantinikatan), Professor Jit Pal Singh Uberoi (retd., Sociology, Delhi School of Economics) and the like. 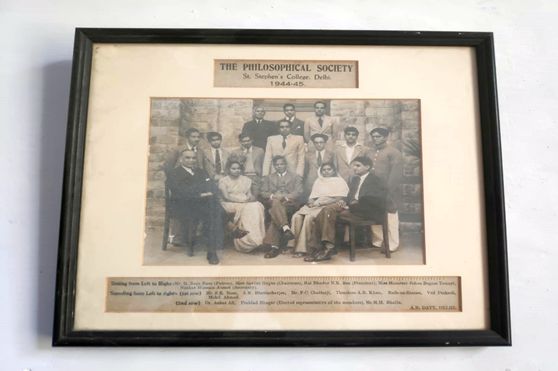 S.K Bose was a student of Philosophy under the tutelage of Ludwig Wittgenstein, after which he taught the same at St. Stephen’s College and is the founder of The Philosophical Society. He died on the 5th of April, 1985, and in his memory, the society conducts the prestigious S.K. BOSE MEMORIAL LECTURE annually. The first lecture was delivered by Prof. Sibajiban Bhattacharya. In 1986, Imperial Avenue in front of the College was renamed Sudhir Bose Marg, in memoriam.

The Society has always strived to maintain a democratic atmosphere with the student and the professor given equal standing. Students from different courses are always welcome and the content of the discussion is tailored keeping them in mind, and preserving the intellectual tradition of philosophical discourse. With time, the society has broadened its horizons keeping in mind the advancement of technology and the ever-growing reach of philosophy- it now holds movie screenings, seminars, presentations, etc. The Society also develops an annual journal called Kosmos, wherein bright minds from the whole country publish their work and engage in discussion and dialogue. The literary department of the society also maintains a blog Smṛti, providing a platform for its members to share their work on the online platform.

Praśna is the annual festival of the Department of Philosophy of St. Stephen’s College. It is a two-day festival where students and professors from all over Delhi University come and present their papers and present lectures on various topics such as Existentialism, Philosophy of Religion, etc. It happens in the even semester of a given academic year. During the festival, there are other events such as short movie screenings, thought experiment sessions, film screening, and Quiddity, the philosophy quiz. Prizes are given away to the winners of the quiz and other events that are held. This year Praśna is set to take place on the 12th and 13th of April, 2022. It features lectures from distinguished professors, various activities like movie screenings and thought experiment sessions. Further, competitions are set to happen for paper presentations and a quiz competition, and an Ethics Bowl.

The 2021 – 2022 executive members of the Philosophical Society are: